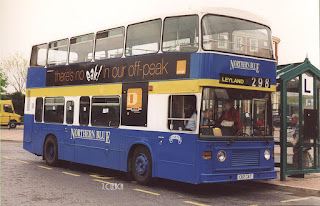 East-Lancs Coachbuilders gained a reputation for turning out ugly buses and that dubious honour was well deserved if this example of craftsmanship is typical. This former Kingston on Hull Dennis Dominator doesn't look like it was designed just thrown together. It's only saving grace when seen here loading in Burnley for Leyland was it's attractive Northern Blue livery. I think part of the problem at that time was it was about the only bodybuilder left which offered customers with smaller orders in the Municipal sector  the buses they really wanted when it came down to exact specification, something they were used to and thus hated the off the shelf National and Metrobus. Cheapness was more important than looks too at a time when impending Deregulation was spreading uncertainty in the industry..
Posted by christopher at 16:34