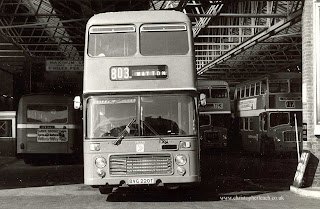 I was never a great 'Tilling' fan but for various reasons one gets to like certain companies more than others. A good example is Eastern Counties whose cheery red buses and largely unspoilt operating area made them seem a lot more inspiring than it's seemingly less friendly green neighbours. Also even in NBC days it seemed very civilised with good tidy facilities including the bus station and garage in Norwich, something that is more striking today in the age when garages have been replaced with fenced yards fences and helpful inspectors by an anonymous website or busy telephone number. Even in 1981 here as well as in the city of Cambridge the company ran a sizeable fleet of half-cabs Bristol FS and FLF's but as you can see they were quickly being replaced by new buses like  Bristol BVG220T No.VR 220 or more depressingly you might agree the ubiquitous Leyland National.
Posted by christopher at 02:11