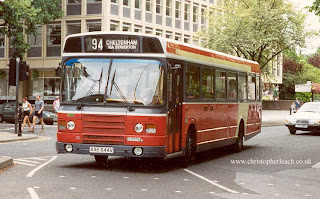 Because of it's large coach station Cheltenham was somewhat overlooked as a town for buses and especially in the later years of the BTC with it's mundane green ECW bodied Bristols and of course the NBC era which was even worse with it's added blandness. However with the passage of time we've learnt to enjoy them too and this National Mark2 one of many in the town looked a lot more interesting in it's then Cheltenham & District livery just prior to getting those hated Stagecoach stripes.
Posted by christopher at 02:56

Photographer Melbourne said...
This comment has been removed by a blog administrator.
26 June 2012 at 05:25