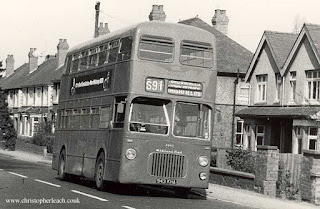 From a bus viewpoint think of Stafford and Midland Red fans usually think of the revolutionary underfloor engined D10's as they came here in a run down condition 1964. But once they were brought back up to scratch they were just as reliable as the other BMMO's including the D9 and it's a pity they never stuck with it.  In 1969 4943 was caught heading up the Newport Road bound for Highfields Estate. As I was at Wythall yesterday I had my first ride on her since the Sixties, I also went on the SON, S12, S16, S20, CM6 and a D9 so it was an enjoyable and well organised Midland Red day. Thanks to all concerned.
Posted by christopher at 03:51