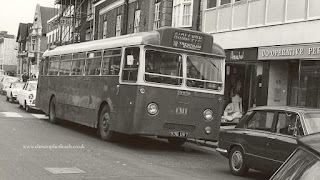 A 1962 PMT Willowbrook bodied AEC Reliance makes it's way through Stafford on an extended works service to the main English Electric works on the Lichfield Road in about 1969. In the early Sixties the company was splitting it's yearly twenty bus saloon contract equally between Leyland and AEC. When English Electric was in it's prime in the days before the advent of general car ownership in the rush-hour there was a bus almost every five-minutes on the Number 10 Hanley-Stoke-Stafford.
Posted by christopher at 07:44