Crosville Bristol RE ELL 530 in Chester 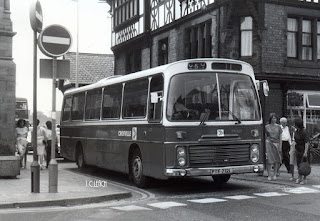 Favourites of mine amongst the many Bristol ECW products were these rather attractive RE coaches like green and white  PTF 719L seen in Chester. However even though it's previous owner had the red version of NBC livery I think this one only stayed long enough to carry full white coach colours but that is just a guess. One one the nice things about the Crosville numbering system it's letters ELL 530 included the maker of the engine in this instance Leyland.
Posted by christopher at 07:00

The Crosville letter codes described the vehicle:-
- the first letter was the class of vehicle: C for a coach, D double-deck bus, E dual-purpose and S single-deck bus;
- the second letter was (if I remember rightly) the type of vehicle: O for Olympian, that sort of thing; and
- the third letter was the engine: G for Gardner and L for Leyland are the only two I remember.

So, in this case it's ERL rather than ELL and means it's not being treated as a coach by Crosville:
- E means Dual Purpose;
- R means Bristol RE; and
- L on the end means it has a Leyland engine.

My personal favourite Crosville type code was that used for it's Gardener-engined Leyland Olympian double-deckers: DOG. Never heard one barking, though...

Thank you for that I was tempted to add some of that but I was in a hurry. As for the Olympians many of the drivers I bet they thought it was a dog's life.