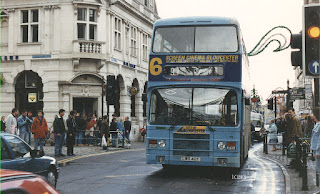 Despite the Christmas decorations I don't think it was the festive season yet but they obviously go up very early in  Gloucester. The NBC bought both but the Roe bodied Leyland Olympians were not so common as the more familiar ECW bodied buses but  new to Bristol Omnibus as seen here here and London Country had a lot of them. I thought these looked a bit more attractive in a quirky way when they were new with the extra brightwork but perhaps not so much once they had been allowed to get a bit scruffy.
Posted by christopher at 16:42