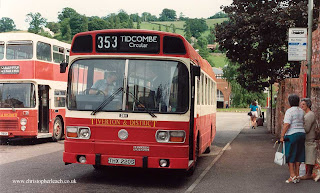 It would be interesting to see how a Leyland National looks in the pre-NBC colours of some BET Gtoup members like PMT or Yorkshire Traction. Well you couldn't do much better than take a look at this former London Transport Leyland National in service with the Tiverton and District operation of Red Bus in Devon. Red Bus in turn was a subsidiary of the privitised Southern National hence the former SN Bristol VR in the background and cast metal fleet numbers were carried too, a practice that had gone on since before the Second World War with Southern and Western National. Even if one wasn't aware that Tiverton and District was part of a larger group the high fleet-number of 2811 was a bit of a give-away as there were no more than 12-15 buses parked in a yard here.
Posted by christopher at 16:30