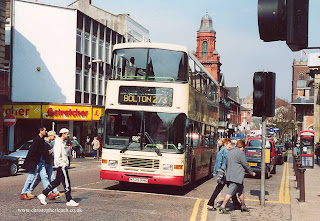 Of the many local Municipal bus companies in Britain sadly few remain. Almost every large town in Lancashire had one including Bolton. But by the time this view was taken in the late-Nineties it too was just a memory. However like the seaside town of Blackpool another survives in the shape of Rossendale formed from the old Rawtenstall Corporation. Since Deregulation it had bought many second-hand vehicles but this Alexander Royalist bodied Volvo Olympian had been new.
Posted by christopher at 11:57