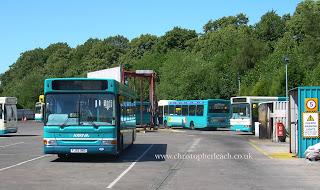 Following a disagreement with the Borough Council over funding Arriva has decided to reduce it's fleet in Stafford from sixty buses to a mere sixteen plus two spares. The Garage will then only work town service routes with some frequency cuts, starting later and which will all finish by 8.pm. Becoming a sub-depot of Cannock no doubt there are plans to move the garage to smaller premises and many of the longer services will be transferred to this garage too where there is unused capacity. The unreliable former Stevensons route to Uttoxeter will probably go to Burton with a couple of buses being housed at the Spath outstation with the Telford to Stafford route going to Wellington. No doubt this will bring a bit more variety into the town bus wise but it can't be very nice for the crews who have to re-apply for the few driving jobs that will remain after February.
Posted by christopher at 03:35