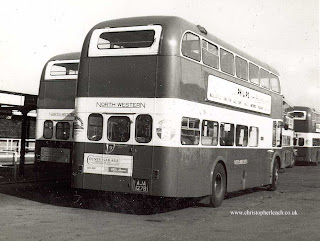 After Switzerland I spent two terms in Cheshire at Great Budworth where I was close to the Warrington-Northwich 135-6 Service. This regularly employed the ten fine AEC Renowns to be found  at Northwich. No. 127 plus 115-117 were from the second 1964 batch of fifteen Park Royal bodied buses of which not all four examples arrived here when new. Probably some were displaced in the Stockport area by Fleetlines when still quite new. However secondhand Daimlers were to arrive here too in 1966 plus a few months later some new examples.
Posted by christopher at 04:10