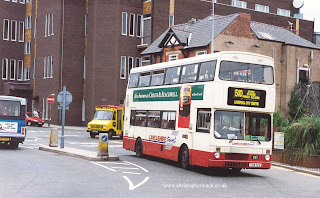 I feel much of the fierce competition following Deregulation was rather childish, anyway that's how I see the way the former Liverpool and Manchester PTE's invaded one another's vast territory for neither side could have gained much from it. But it certainly gave us enthusiasts a bit more to see and wonder about like for instance was Merseyside trying to steal a bit of the old much missed Lancashire United Magic too? Merseyside PTE had standardised largely on Leyland Atlanteans but as they were phased out more other double-deck manufacturers appeared including MCW with the Metrobus like No.0811 F811YLV which would have offered a rather pleasant ride back to Liverpool from Wigan just situated in the former Manchester area.
Posted by christopher at 02:18