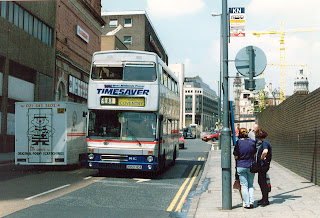 When West Midland's applied grey to it's new coach seated Metrobuses to make them stand out it was rather effective, but as with First Group when the whole fleet slowly turns to grey it can be slightly dull. Having said that it might have seemed an eternity but following Deregulation many liveries seem to alter all the time including Travel West Midlands.No.2959 D959 NDA was on the longer type limited stop 900 Service to Coventry which they were bought to do.
Posted by christopher at 03:12