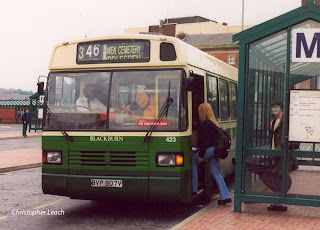 .....but the passengers don't have to follow it, but the rebuilt  Gardner powered Greenway would have been a big improvement on the notoriously smokey National1. Blackburn 423  though had been one of the first National2's as Midland Red 807 at Stafford Garage which came with a less problematic but loud Leyland 680 engine. As well as this a former Stafford Mark1 National 637 was also rebuilt as a Greenway but stayed with Midland Red.
Posted by christopher at 01:14