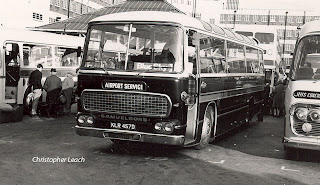 Sadly some of the smaller BET/BTC operations are almost forgotten like one of my favourites Samualson's whose coaches looked magnificent in blue silver and white. Indeed my favourite of all  London coaches were Harrington Grenadier bodied Leopards DYM452-455C. Samualson's moved to it's home here at Victoria Coach Station when they were bought by it's owner's London Coastal Coaches in 1936. AEC's had been normal but after the Grenadiers Leopards continued to be bought but future deliveries like KLR457D had Duple Northern bodywork.
Posted by christopher at 14:44