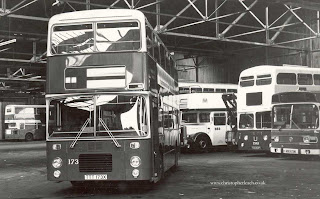 I was fortunate enough to go around the large Milehouse garage in Plymouth on a couple of occasions. As you can see my last visit witnessed a still newish Olympian. Even though Plymouth had legions of Atlanteans these three East Lancs bodied Leylands weren't popular here and were non-standard enough to warrant an early sale. After a spell with Stevenson's of Uttoxeter they moved on to Wilts & Dorset. Indeed the mini-bus era was about to start followed by the single-decker and so apart from a few second hand units for schools work the double-deck fleet gradually disappeared including the open-top fleet. Thankfully in recent times used modern double-deckers have been reintroduced on a couple of busy routes.
Posted by christopher at 03:22