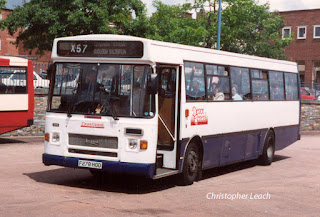 An interesting bus when I photographed it at Exeter with Devon General was 995 one of a small batch of Plaxton Bustler bodied Leylands acquired with Brixham Travel. Not only was it by this time the last big bus in former mini-bus driver Harry Blundreds eccentric now almost totally minibus fleet, but after a spell at Oxford where it joined it's sisters this much travelled Tiger was bought by Midland Red North and being at Cannock Garage it became a regular visitor in Stafford. By coincidence at the time the MRN General Manager who also lived in Stafford was Tiger fan Chris Hilditch who christened them 'our battle bus' and who shortly moved here to Devon to be boss here for new owners Stagecoach where they quickly thinned out those little not too popular so-called Bread Vans. F278 HOD moved on again to P & O Lloyd in North Wales for more service.
Posted by christopher at 02:33