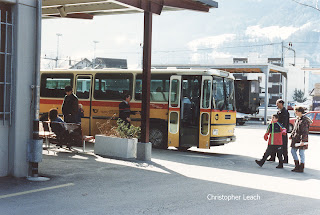 Meiringen was home to eight of these Hess bodied FBW 40 VH-R buses of 1977-78 fitted with small Mercedes engines. I never rode on one but I understand they were rather noisy.  Despite this little town famous for it's connections with Sherlock Holmes having a PTT garage with twenty-two buses about seven were outstationed up the Brunig Pass whilst another five moved away in winter as the longer routes through the passes were cut right back leaving just a couple of local runs to villages. So when I arrived one one  Sunday in 1992 there was just P23418 numerically the last of the nineteen to be seen loading for Gadman.
Posted by christopher at 01:58