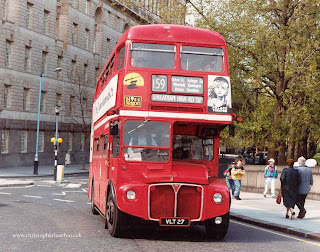 When I was a teenager I spotted all the red Routemasters with I discovered later the exception of RM 1108, but there were another fourteen very early ones I needed too including RM 27 seen here about to cross The Thames which couldn't be seen as when these former West Ham Routemasters went for their first major overhaul they disappeared inside Aldenham Works for a number of years. By the time I snapped this one looking quite smart in the Nineties my spotting days were a distant memory.
Posted by christopher at 09:06