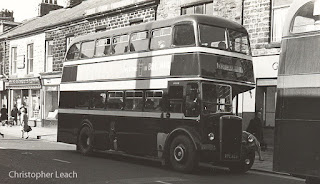 For photography a dark bus in shadow is not a good idea but surprisingly it works quite well as somehow not only is the bright work highlighted on this early Fifties all-Leyland PD2 of Rawtenstall seen in Accrington but we can also see the elaborate traditional lined-out livery which gives this 1968 view a timeless feel. At about that time afraid that they might be dragged into the forthcoming PTE's Haslington and Rossendale Corporations merged their fleets, and unlike Ramsbottom just down the road towards to Manchester whose dark maroon and cream livery was rather similar they managed to avoid the impending orange and cream  'Municipal Oblivion'.
Posted by christopher at 09:12