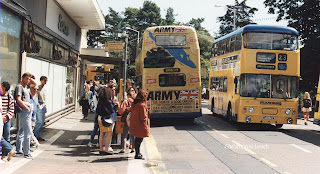 Despite the affluent feel in Bournemouth in July 1992 the Army was still trying to tempt any unemployed to become soldiers by advertising on the buses but I don't think there were any takers here amongst this laid-back bunch. As well as a rather ugly Marshall bodied Olympian rear much more pleasing was the town's more traditional Alexander front on Fleetline MFX176W.
Posted by christopher at 11:29