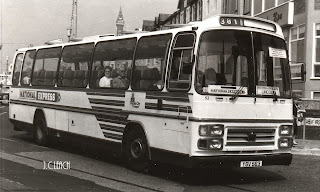 In it's later years especially as the NBC favored the Leopard over the Reliance in the UK it was perhaps only because London Country still wanted this AEC for it's Green Line duties which kept it on the order books. These coaches were leased  through Arlington the dealer but the good thing about that was when the contract expired smaller AEC fans had an easily affordable source of mid-life coaches. One of the less obvious purchasers was Lincoln who bought this Plaxton example for a National Express contract.
Posted by christopher at 01:41