The Ambassador Sends his Compliments 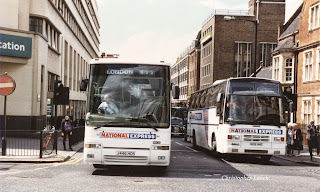 By the end of the Eighties the Plaxton bodied Volvo B10M had become the norm for National Express work. Having said that there were a few Scania's too and of course the odd dwindling newer example of the Leyland Tiger like this one G109 HNG belonging to Ambassador leaving Victoria Coach Station for Cromer. Ambassador was by now a dated and meaningless sort of name once embraced by often two-bit coach firms to make their coaches sound posh and luxurious. However I  like the idea of some diplomat's female staff wearing a tight but not too short dress and expensive stockings busy  dishing out champagne and Ferrero Rocher to the pensioners with their boiled sweets or back-packers with their crisps and bottle of pop on the boring journey to Norfolk.
Posted by christopher at 03:09