Are you absolutely sure this is Prague? 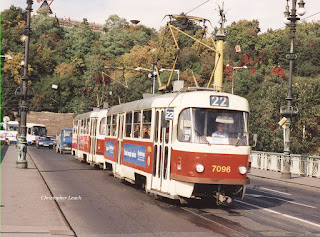 Well of course it is but it is not something you should take for granted as unlike the historic Renault buses that gave Paris it's strange vintage 1930's feel or the big red Routemaster that goes with the mini-skirts and commercialisation of the 'Union Jack' if Sixties Swinging  London these rather businesslike Tatra trams have operated all over the former Communist Block, and not only that but often almost in the same colours. Naturally being a city icon the Prague examples tend to be some of the smartest . Ugliness was almost a trademark in the Communist East so by their standards someone rather let the side down as although still rather functional these these Tatra had a welcoming elegance.
Posted by christopher at 02:11