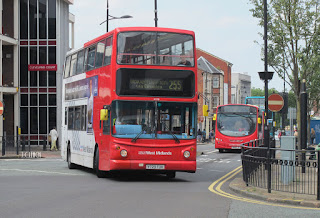 Because some buses have been around so many years an acceptance becomes fondness and then when their number start to dwindle they become favourites. National Express Travel West Midlands has a reputation for running elderly buses but in good condition like this Y-Reg Alexander 400 bodied  Dennis Trident so typical of the fleet but despite it's smart appearance it must be almost sixteen years old which is twice the age of the oldest Stagecoach buses. Upstairs they seem a bit spartan a bit like a modern version of the shaky bodied MCW Orion of my youth but they do make some enjoyable sounds that still remind me a bit of the much more tuneful and much missed Metrobus also to be found in numbers at Wolverhampton.
Posted by christopher at 00:02

Stagecoach East Midlands still have R, S and T reg Olympians in daily use, so it's not only NXWM who are using older stuff.

Stagecoach EM also have the gall to claim all their routes are low-floor easy access, then turn step-entrance Olympians out!

Obviously I only get to see the newer Stagecoach buses in cities like Exeter and Manchester.