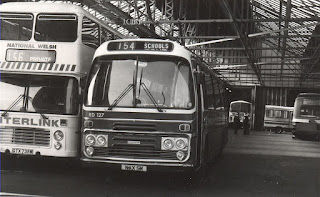 To be honest I can't remember which garage this was as I was just passing but I think it was Brynmawr with a typical mix of NBC vehicles of the time in the mid-Eighties and the Plaxton bodied Bristol  RELH6L looked particularly inviting The police were here making enquiries and later I saw another officer down the yard at Chepstow and even though he was twice as far away as these two he had a good old go at me for invasion of privacy because he was in the picture. Times have changed and the police these days like to be treated like the rest of the community but then in more rural communities I think some might might not have felt above the law but believed they are the law and had a bit of a chip on their shoulder to those who did not bow down in front of their panda car. I have since been told this was Cross Keys so my heading has been changed.
Posted by christopher at 13:50

Looks like Crosskeys depot, which has since closed and has been demolished.

Thanks I was just guessing.