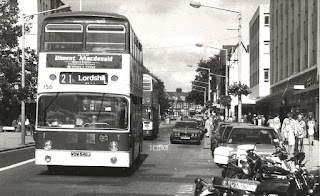 When in the early Sixties Ralph Bennett worked with the body builder East Lancs to produce an attractive modern bus for his fleet at Bolton it set a precedent amongst other Municipal customers for bearing their own base colours of course similarly liveried buses could be found as far afield as Blackburn and Merthyr plus as we see here at Southampton where they had a large fleet of Atlanteans. In later years as can be seen from the way paint has been applied to the bus following the classic Bolton livery layout was reversed with I feel had a detrimental overall effect.
Posted by christopher at 04:30

This photo is amazing! On the front of that bus is our business advert. We are now www.dmdancecentre.co.uk and have been a dancing school in the town for 40 years! Please may I keep this photo for our history records?

Hayley I'm glad you like it and it brings back memories. No problem you are more than welcome to it do you just want to copy it off the computer?