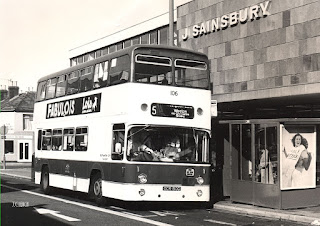 In the Sixties the BET Group could present a very modern image with it's curved glass same at both ends single-deckers and stylish products from Alexander like the Y-type and double-decker. The municipal sector was a lot more staid in it's 'tried and tested ratepayers money' approach but Ralph Bennett shook things up when he cooperated with East-Lancs to create striking new buses for Bolton. They first appeared with a flat front as part of the concept but this soon gave way to a more popular modification with  curved glass. Other concerns were able to buy these buses too and they modernised many Corporation fleets including Southampton where they came to dominate. What I liked about this city was the fact that the new buses wore this the Bolton arrangement whereas the half-cabs retained the mostly dark red traditional scheme to the end and looked much better for it as it made the new ones look even more modern and exciting yet at the same time respected the heritage and suitability of the older fleet.
Posted by christopher at 00:15