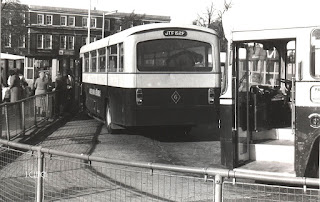 Warstone's Green Bus was an Independent of real character running smarty turned out almost historic vehicles in a smart dark green based livery. For a small fleet they covered a wide area but probably the best place to see them was at Cannock where a former Rossendale East-Lancs bodied Leyland Leopard prepares for it's next trip. These had been ordered by Rawtenstall before it merged with nearby tiny Haslingden Corporation with one of the three having been ordered for that fleet and were the first new buses for Rossendale. Indeed the link between the two was close as both shared the same general manager. I remember being able to inspect one in the garage before entering service and was a bit shocked to see that the interior roof etc. was filthy.
Posted by christopher at 17:14