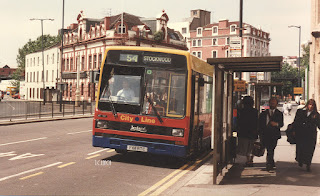 If I were to write a book about the first few years after Deregulation I might well want to get 'Indian Summer' into the title as it was a good time to be interested in buses and for all we know probably the last time to feel any excitement as things would never be the same again. It was a bit like when a piece of forest is cleared of tall trees and all the flowers and saplings suddenly appear all growing as fast as they can to stop being smothered, some of course are just weeds but others establish themselves and not only prosper they can also be admired before eventual takeover. Larger companies were formed as parts of former PTE and NBC fleets were brought together and re branded. In a light green and cream Badgerline had one of the most pleasant liveries but it's fleet within Bristol itself wore a striking red blue and yellow scheme as seen on this Leyland Lynx, one of many in the group. Even though the registration marque TC was transferred to Bristol many many years ago I still can't look at it without thinking the bus should be in Lancashire.
Posted by christopher at 03:13

Sorry, Christopher, but I have to correct you on this one: CityLine wasn't a fleetname for a Badgerline unit.

When Bristol Omnibus was split into three at the end of NBC, the northern/eastern bit was hived off into Cheltenham & Gloucester Omnibus Co., the southern/western bit into Badgerline and the Bristol city operation stayed as Bristol Omnibus Co but branded itself CityLine.

Later, of course, MRW merged with (or, depending on your opinion, was taken over by) Badgerline Group and then CityLine did become a Badgerline subsidiary, but it was still a separate company in the group and not just an operating unit.

It would have been around then that we started seeing the friendly badgers pop up on buses in various parts of the country, which to me was a much better way of showing corporate ownership than than the flying foxtrot logo and dismal grey livery that the accountants imposed after Aberdeen Corporation Transport got their hands on Badgerline Group.

And after the history lesson, doesn't that bright CityLine livery look so much more friendly, welcoming and enticing than any of First's basic corporate livery styles?

Thanks Ross I'm often a bit wayward with my facts, I agree totally Badgerline had a fresh human look but everything went downhill after the Grampian merger.