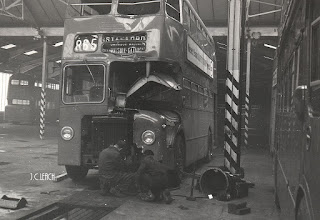 This photo was taken late in the Sixties after one of  the Midland Red Stafford D9's had had a bump whilst on the long 865 to Dudley via Walsall. I don't know what happened here but the roads crossing Cannock Chase are particular accident black spots with speeding cars, dips in the road and of course straying deer, not to mention hard to see big red double-decker buses. Unlike the one beside it this bus was an earlier example built with wings around the wheel-arches and as far as I know 5316 also at Stafford was the first one so treated..
Posted by christopher at 16:07

Excellent - a rarely-seen side of bus activity.
It may amuse you to know that a D9 currently features on a stand (Carlyle bus parts) at the Euro Bus Expo in Birmingham. It's not the only heritage bus there - the first Mancunian (1001) can also be seen.

In the Sixties I used to buy an excellent trade magazine called 'Bus and Coach' and each edition featured a different aspect of the industry with interesting well illustrated articles and many of these showed this side of bus work. Now restored in Manchester I've travelled on 1001 and it is still an impressive sight.