1982 My quest to snap the last half-cabs in Norwick 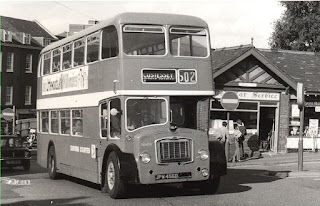 A lot of my black and whites were taken when I used to deliver electricty meters to the various test stations. The most distant ones were at Redruth and Aberdeen but GEC already had their own large van to do the distance stuff but when it was very busy I was dispatched further afield and occasionally visited EEB at Norwich. This is a lovely city and at this time I was eager to snap as many of the few remaining provincial half-cabs as I could and this was one of the last places where Bristol FLF's in quantity were out all day. Of course the same was true in Bristol but not that it mattered here but these were red ones lol.
Posted by christopher at 02:17