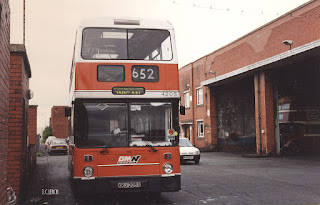 Wigan with it's pretty well 100% Leyland fleet quirky numbering system and liking for locally built Massey bodies was one of my favorite corporation fleets. But I have to say that by the time it became Greater Manchester North the garage at Melverley street looked very run down and depressing and not helped either by the relentless red-brick. Like Bolton nearby at least it retained it's Leyland tradition and Atlanteans with Northern Counties bodies also the choice of former days were very much in evidence.
Posted by christopher at 06:40