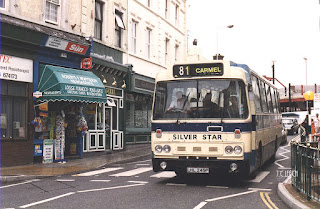 When I visited Caernarvon at the end of the Nineties it was still interesting bus wise with Independents as well as Crosville Wales. Here is a former West Riding Leyland Leopard LHL 245P with Alexander bodywork operated by the long established Silver Star which had about ten vehicles but which had served the town since the !920's from a number villages out towards Phwllheli including Rhosgadfan where the buses were garaged.
Posted by christopher at 15:04