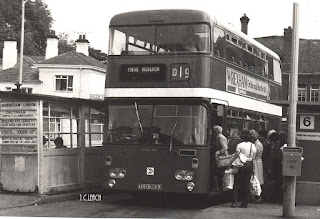 One of the good things about the NBC I suppose is it 'unfroze' the former BET and BTC fleets so that new types suddenly appeared as happened here at Wrexham as some Southdown NC bodied Fleetlines arrived to speed up Lowdekka withdrawal and facilitate more 'OPO'. The trouble was Southdown got rid of it's Daimlers and Atlanteans and got saddled with Tilling Bristol VR's but size didn't matter as when it had come to merging the two groups the old BTC management as happened at the much less significant Brighton & Hove District took control of the reins. So after Nationalisation the delicate Pret a Manger South Coast treat became more like the dried up British Rail cheese sandwich in cellophane you throw away to the gulls.
Posted by christopher at 00:39