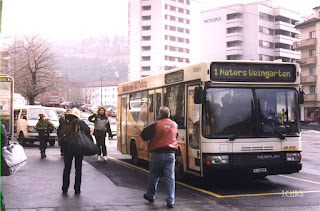 Brig is one of those Swiss towns people will be familiar with as it features on railway information boards but unlike the cities and tourist destinations nearby relatively few people come here except passing through. For me though liking Post Buses it was almost a destination in itself especially as there was also another PTT garage just down the Rhone Valley at Sion. After the PTT was broken up and the telephone side sold off the years of  little substantial change evaporated as it became much market focused. It sold off it's garages and either leased them back or turned them over to sub-contractors but it grew as it took on more work especially in France. This was a good example as here in Brig there had been a local operator doing a town service but as you can see from it's P-Reg which they still had then the little Neoplan had become a Port Bus.
Posted by christopher at 03:08