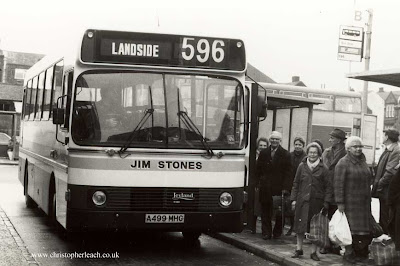 The Lancashire Independent Jim Stones of Leigh gained something of a reputation for it's extremely well turned out fleet of single-decker when it had found a nitch operating local services in the town. But this operator had already been of note when it's bought off Leyland the only example in Britain, a small Danish built DAB demonstrator of 1981 which Leyland had hoped operators would turn to as a replacement for the recently retired Bristol LH. No doubt cost must have put them off rather than the wonderful quality of the Silkeborg product and Leyland ended up selling the cobbled together Swift instead which basically was a converted Terrier truck. Of course Dennis then came along with the Dart which with the Plaxton Pointer body became the big success story of the Nineties and guaranteed it's future. As you can see there were plenty of smiling faces amongst the people boarding A499-MHG for Landside in the rain in the old Leigh Bus Station. One wonders whether Leyland might have still been with us today had it managed to sell it's better products.
Posted by christopher at 09:03