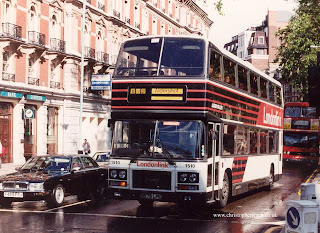 One of the best innovations of the National Bus Company was the introduction of it's so-called venetian blind liveries on dual-purpose coaches which allowed it's various operators to show some of their original colours or to experiment. Perhaps the boldest of these was that worn by Alder-Valley whose London links vehicles looked very striking in their red and black stripes. This was helped by the rather pleasing lines of the ECW bodies worn on the long wheelbase Leyland Olympian coaches by the NBC on busy commuter express services into London.  No.1510 was seen in Victoria during the Nineties seems to sum up this increasingly colourful period prior to the big break-ups in the industry.

Posted by christopher at 14:56