In Lisbon they never scrap buses 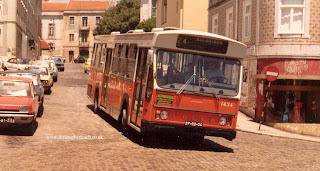 Unlike the rugged half-cab AEC 's of yesterday, or rather the day before as this must be a later yesterday, later buses didn't get through many bodies as unlike the Regal's and Regent's their mechanical parts were no longer of much use either. No doubt though I expect Carras got good value from Eighties Volvo's like No.1434 trying to wear out the cobbled sets as it hurries out to Alcantara.
Posted by christopher at 23:46