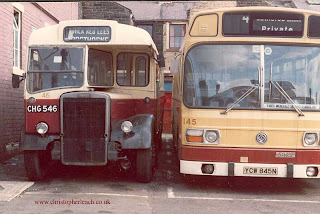 Burnley Colne and Nelson was a late buyer of the Leyland PS2 and consequently at least one example,  a 1954 East Lancs bus lasted till the end of the Seventies and makes an interesting contrast to the modern National at Queensgate Depot. Unlike today how nice it was that many of the old livieries suited their surroundings.
Posted by christopher at 01:27