National Express: Would the future bring single or double-deck coaches? 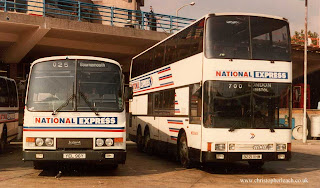 In the Eighties interest reappeared in the concept of the double-deck coach for long-distance express services. Leyland had already suppled the National Bus Company with a fleet of ECW bodied double-deck semi-coaches for commuter routes into London and MCW having already built three-axle double-deckers for the Far East came up with a high capacity vehicle for National Express. Sadly from what I was told is they were a bit slow and not very popular with the crews. It's a pity as they were rather attractive in a subtle way, but the double-deck coach concept has never really taken off here due to a number of nasty accidents that have stolen the newspaper headlines. I think I was about to board Wessex B221 VHW going as far as Bristol on my way home, and I travelled on the more sprightly YEL 96X too as later Drawline it's new owners transferred it to Midland Red North where it was allocated to my local Stafford garage.

Posted by christopher at 02:45