Delemont:: Time for a chat 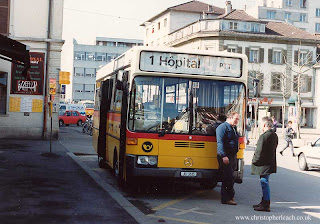 One of the nice things about liking buses is that it often takes one a bit off the beaten track as for instance to a more relaxed Delemont on the edge of the Jura close to the French border. The PTT itself had a small garage here with less than ten vehicles but most the services were entrusted to a local contractor. However they discontinued the contract and with a new garage opened in the Nineties La Poste as it is now known has more than doubled it's local allocation based here. JU 3615 was a one of a number of buses that gained P-Reg plates after the takeover.
Posted by christopher at 09:25