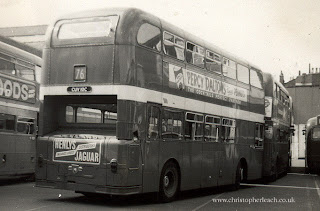 We have become very accustomed to variety and the random mix-and-match nature of the bus scene following the succession of mergers and overnight changes that followed Deregulation. But in the Sixties everything was done properly and everything had it's place and so one would not expect to see off-the-peg Park Royal bodied Leyland Atlanteans like XA 10 plying their trade alongside the capital's familiar Routemasters. However that is what occurred when a batch of them arrived in red plus eight similar looking XF-Class Fleetlines for the green country area were also acquired as part of trials to help plan future buying policy. The less than perfect Leylands did not find favour here and in mid-life all fifty found themselves being shipped off to Hong Kong with the consequence that they represent one of the few important historical London types that hasn't been preserved. Tottenham Garage ran some on the 76 to Victoria and  CUV 10C shows off that characteristic rear bustle that made them look very much like a taste of the future in 1966.
Posted by christopher at 15:39