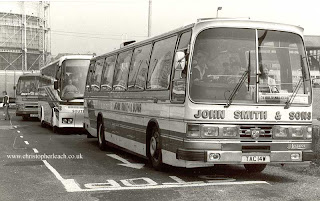 I'm afraid that to me these old British buses and coaches of the past were maybe not exactly quite in the same league as girlfriends, although often more reliable, they were however a bit like family and friends. Now that they've gone places like Blackpool and the little bustling corners they used to frequent that were once most welcoming feel empty dull and in a surreal way lonely. As Smith is probably still the most common name in Britain now after Patel not surprisingly it features widely amongst bus operator's too. Before Leyland Leopard TAC14W was sold to John Smith and Sons I expect it either belonged to Harry Shaw of Coventry or another one, Smith's of Tysoe.
Posted by christopher at 03:57