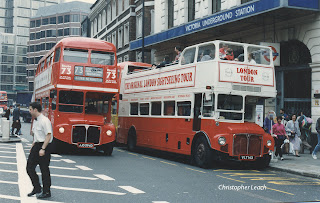 In the early Nineties as their numbers started to dwindle Londoners started to treasure the Routemaster and some gained extended lives following a major overhaul. I'm glad they lived on but I'm afraid the re-engined RML's never did much for me as without those AEC engine sounds they sounded a bit 'third world' and seemed to have lost their soul and magic. On the other hand one has to stand and admire the way London Coaches not only presented it's fleet but the efforts made to return RM's to an original spec.
Posted by christopher at 11:38