3024 pauses at the Pedestrian Lights 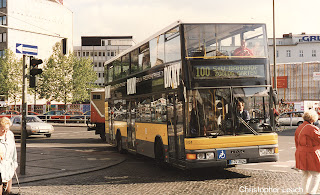 It doesn't seem five-minutes ago that this batch of Berlin MAN double-deckers were new but dating from the Nineties they are now just history too. 3024 was on what is probably the best known route in the city as not only is it the best for sightseeing it connects the heart of the old West Berlin to the best known landmarks in the old East Berlin.
Posted by christopher at 04:10