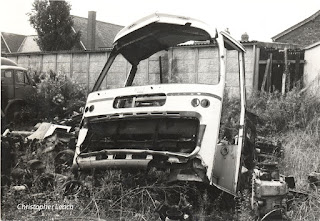 It was rather upsetting to see the Plaxton front of former Midland Red WHA229H in this state at far end of Martins yard at Middlewich for this Leyland Leopard had been new to Stafford in 1969 and something of a flier. At the time odd other ones from the same batch had been rebodied so I had some hope as it was only about twelve but alas I believe it was not one of the lucky ones.
Posted by christopher at 01:49