Williamson's on the X96 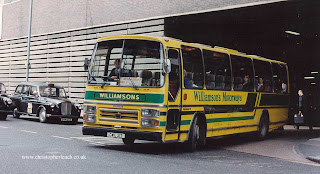 Once the long distance services like the X96 which crossed much of the BMMO empire were a source of pride for Midland Red. But during the NBC era they were cut back and by the time Williamson's were operating it, it only ran from Birmingham to Shrewsbury.  Nevertheless this former Colchester Leopard looked rather good as it headed out into the sunshine leaving the gloomy depths of the Bull Ring Bus Station behind.
Posted by christopher at 02:36