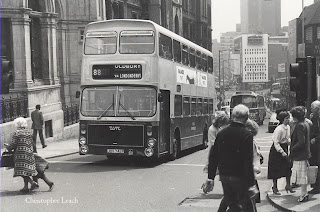 Sadly none of the liveries found on PTE buses could compare to the often more elaborate and in many cases better kept municipal hues they replaced. But even if it was a slightly watered-down version of the old dark blue Birmingham City Transport, West Midlands PTE was better than most and it looked rather attractive on these my favourite vehicles in the Seventies fleet  Alexander bodied Volvo Alisa's bought and operated on old Midland Red routes from garages like Sutton and Oldbury. After buying three trail buses another fifty followed including 4742 JOV 742P. The later Volvo Citybus was considered too but the idea was dropped as it would have hurt the MCW who was building the Metrobus in the city.
Posted by christopher at 04:05