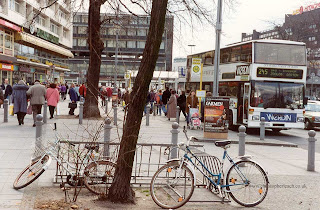 Much of central Berlin is hardly beautiful especially the areas like this near Zoo Bahnhof which were covered in uncompromisingly square concrete and glass after the war. Somehow the shape of these MAN buses fitted in nicely but unlike a lot of the architecture we now miss them as they had a turn of speed powerful roar and so much more character than the very quiet and more sophisticated new generation of more lumbering six-wheel Lion buses. The 245 on a bus like 3912 was a long and interesting ride all the way to Tegal as it criss-crossed a meandering path either side of what was once East and West Berlin. Sadly with more focus on the U-Bahn system many once long routes like this have been cut back as for some reason people prefer to get there at greater speed by rail but we can't all be on holiday.
Posted by christopher at 02:12